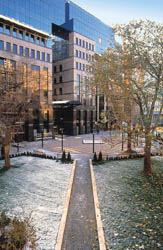 The UK scored a considerable victory when it acquired this beautiful building. The exterior is grand but it's the interior that is truly impressive. The building originally housed the Domestic Bank. When it was designed, the cashier's hall was covered with an art deco-style glass ceiling. To this day, the building (or at least the hall) has remained unchanged. The paintings on the walls are extremely valuable. The interior can be seen during exhibitions, which are held every now and then - just phone the Embassy for details.

Tram number 2 and 2a are used for normal public transport, but they also offer the tourist a wonderful ride. Running along an elevated section on the Duna side of the Danube, the tram windows offer exceptional views of Castle Hill, Gellert Hill, the Fisherman's Bastion and so on. Conveniently, the tram ends just past the parliament buildings. It's a great tour and only costs the price of a normal tram ticket. 6am-10pm daily. 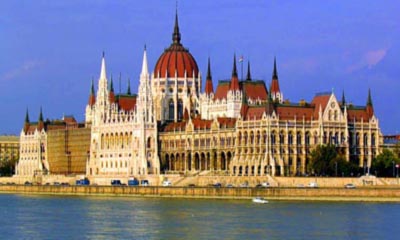 In an enormously symbolic act, an eternal flame was unveiled and lit in front of the Parliament building in 1996. It marked the fortieth anniversary of the crushed 1956 uprising, an event that, along with the Trianon treaty, is one of the largest causes of anger and sorrow for the Hungarian people. Not far away is the statue of Imre Nagy, the executed Prime Minister, who could perhaps be said to be gazing at the flickering fire.

The building was constructed between 1859 and 1864 in a mixture of styles. The façade includes features such as dancers atop columns and busts of former monarchs and famous Hungarians. There is usually always something on here (from orchestral concerts to folk dancing), so check the local listings. 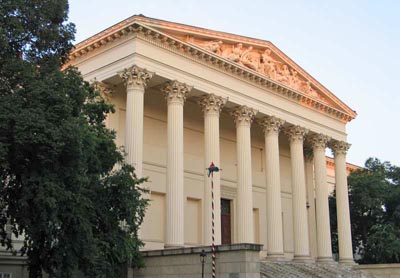 This museum's architecture alone warrants a stop, but it also played a major role in Hungary's history: Petofi recited his famous 'national song' from the steps here in 1848; there is a plaque to commemorate this famous event. The inside of the museum is also stunning, with lavish use of marble and ceremonial architecture. The displays give a thorough account of the history of the Hungarian nation. Admission is HUF400, making this one of the most expensive museums in the city, but it's well worth it. 10am-6pm Tue-Sun; 10am-5pm Tue-Sun (mid Oct-mid Mar) 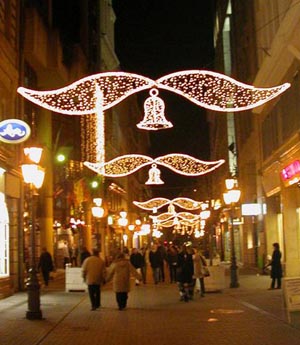 This wonderful pedestrian-only street runs from Vorosmarty ter all the way to Vamhaz korut and the beautiful Market Hall. It is bisected near the Elizabeth Bridge (where there is an underpass) - this is the point where the pedestrian section used to end but a few years back a second section was made pedestrian as well.

While the first section is lively and popular, the new area has more charm and authenticity. Together, they are both truly European: dozens of cafés, fancy shops and outiques and some truly stunning architecture. Don't forget to look up as you stroll down Vaci utca - some of the façades are truly amazing. 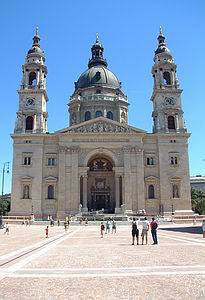 This church is said to be second in size only to St. Peter's in Rome and can allegedly hold 7,000 people. It was completed in 1905 and has been undergoing cleaning and restoration work for the last eight years. It contains the mummified hand of St. Stephen himself, which is paraded around the city on his name day. The cathedral has a height of 96 metres - exactly the same as the Parliament building. For HUF 400, you can visit the viewing platform above the cupola from where, needless to say, you will be able to enjoy splendid views. The platform is open from 9:30am to 6pm, until 31st October.9am-5pm Mon-Sat, 1pm-4pm Sun

This pleasant elevated walkway is much less crowded than Vaci utca and has magnificent views across the Danube to the Buda side. You will pass several of the city's finest hotels - all of which are equipped with spacious, sun-drenched terraces - as well as many private restaurants and cafés. You will also see the famous, ever-popular Budapest wooden chairs and benches - if you have a good look around you'll eventually find a free one. The No 2 tram runs between the korzo and the river and down below is a road where cars rush by out of sight. If you continue walking to the northern end of the korzo, you'll reach the Chain Bridge.

This landmark Budapest café is a must-see. The interior is gorgeous, done up in turn-of-the-twentieth-century Austro-Hungarian opulence. Among other decorative items is the piano that was intended for use on board the Titanic (it failed to make it onboard on time). Enjoy the wide variety of beautiful cakes and pastries at hand. They also make their own chocolate, available in simple bars. The coffee is good. Since Gerbeaud is so popular it is a good idea to ask for your bill at the same time as placing your order.

Although the richly decorated façade crumbled during post war years, it was still easy to appreciate just what a remarkable addition to the riverbank the building was at the time. Completed in 1907, and undoubtedly state of the art for the period, the Palace was fitted with all the latest mod-cons including central heating and a unique central vacuum system. Despite the building being heavily damaged in both World War II and the 1956 uprising, the beautiful wrought-iron 'peacock' entrance gates survived intact. Inside, on the second floor, Miksa Róth's fine stained glass window depicts the Hungarian reformist politician Lajos Kossuth.

Now, after being purchased by the Four Season's chain, over $85 million has been spent on turning the building into a luxury hotel (opening early 2004). For further information, including more on the reconstruction project.