The Castle Quarter declared a UNESCO World Heritage Site, this is the core of the ancient town and has some of the most important historical monuments in Hungary.

Underneath the streets is a labyrinth of caves used by German soldiers during World War two. Above ground is the magnificent Royal Palace with most of its wings now serving as museums. The palace also houses the National Szechenyi Library and the residence of the President of the Republic.

One of the most famous monuments in the the Castle Quarter is the 700 year old Matthias Church with its Gothic towers.

The Castle was the residence of Hungarian kings for ages. The fortification system and the palace were built in the 13th century following the Mongol invasion. It was destroyed and rebuilt many times, and being renewed from time to time symbolizes the country itself. Built on medieval foundations, the Renaissance structures were destroyed by the Turks. Later, the Baroque Palace burned down, then its reconstructed buildings were damaged during the War of Independence (1848). In the late 19 th century Miklos Ybl oversaw the reconstruction and enlargement of the Palace, which was completed in the neo-Baroque style by Alajos Hauszmann. We would recommend you to do a nice walk on the streets of the hill from Becsi Kapu until the Castle. It's a good 20 minutes walk, but the old little streets and houses, and the other sights are worth to see as well. Other way is to walk through the Chain Bridge and then go up to the Castle with the funicular. 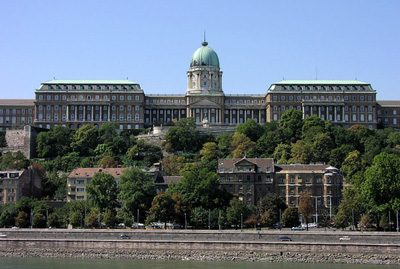 There have been palaces built here since the 13th century. However, they seem to have been frequently razed to the ground, most recently during the hand-to-hand fighting between the Germans and the Russians towards the end of the Second World War.

The palace we see now was rebuilt in the 60's and 70's and houses several museums and art galleries. There is an interesting exhibition of finds from the medieval palace - don't miss the Matyas Fountain at the back.

The best way to get to the palace is via the little cable car (siklo) from Clark Adam Square, which offers spectacular views on the way up. Alternatively the meandering path with many staircases is also very pleasant. 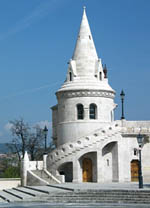 In the Castle Quarter the Fishermen's Bastion is one of the most popular spots of the Castle District with visitors, as it offers a grand panorama of almost the entire city. It is situated at the eastern side of Castle Hill, and can be reached from the centre of the district, Szentháromság tér (Trinity Square). Its architecture is characteristic of the turn of the century; its flights of stairs, its projections, its turrets, and its ambulatory-like galleries make it a mixture of the neo-Gothic and neo-Roman- esque styles and of the romantic baronial castles. In 1901-03, the aim of its architect, Frigyes Schulek, was to provide a worthy setting for the Church of Our Lady (Matthias Church); when building it he also made use of the remaining stones of the old Castle wall. The Fishermen's Bastion received its name from the medieval ramparts system which rose above the suburb named Fishermen's Town; furthermore, there used to be a fish-market behind the ramparts. Beneath the Fishermen's Bastion lies the old suburb of Vízi- város (Water Town), now full of new bindings; its Baroque church towers recall the past. Looking towards the north we get a view of the Danube with Margaret Island.

After you've seen the Royal Palace, take a stroll northwards. The medieval street network remains unaltered and although most of the buildings have been thoroughly restored (the war damage was severe) many retain their original features. You will be able to see the remains of the Dominican monastery; note the Plague monument outside Matyas Church; walk along the castle walls on the Buda side and see the Turkish tombstones at the north-western corner. There are many places to eat out here, but you should expect to pay tourist prices. 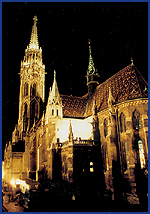 The famous landmark in Budapest. If you know a little about the history you will look with different eyes to this monument. The first stones were put together in the 13th century. The Turkish as well as the 'Habsburgers' did rebuild a parth of the church. The Turkish burned her down and repainted the church to turn her into a mosque. The 'Habsburgers' removed the gothic window and made some changes to give the church a baroque look. Also Jesuits and Franciscans left behind traces. 'Frigyes Schulek' was given the order to make somthing of the church in 1873 since it was in very poor conditions at that time. He redesigned the building in what was the popular style at that moment. And that was eclecticism. For instance the 80 meters high tower is only for 2/3 authentic medieval.. The top got rebuild by the new architect. The paintings on the inside are after old examples. And the rood , the so typical colorful roof is also from his hand. After the chuch got destroyed again in world war II , she got closed for a very long time. The restoration got only finished in 1971. 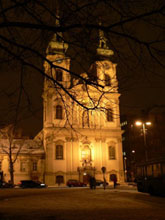 If you've ever wondered where the beautiful unobstructed photos of the Parliament building are taken from - this is almost certainly the spot. Batthyany ter offers gorgeous views over the Danube as well as some sights of its own that are worth a visit e.g. the Church of St. Anne. The metro (M2) began stopping here in 1972 and as a result, the square is now a popular spot for commuters. There are some cafés and a few snack bars in the area as well as a large Market Hall.

In Uri Utca there is the entrance of this strange monument: the Buda Castle Labyrinth. They are situated in the complex of caves and cellars underneath Buda Castle District. The unique calcareous tufa caves of the Castle Hill were created as an effect of the hot water springs. These cave then served as a refuge as well as hunting ground for the prehistoric man. Later the cave were connected to each other and the complex developed into a labyrinth. In the 1930 the complex of cellars was converted into a shelter large enough to accomodate more than 10000 people. It was a secret military installation during the Cold War. Today you can explore them and to discover them history.

Historic Buda occupies the western side of the Danube. It is the home of Castle Hill, Gellert Hill, and the wonderful Buda hills. Traditionally, this was where the nobility lived (while Pest was a workers' and merchants' area). The city began to come into its own in 1873 when Buda was united with Pest. The best views of Buda are from the Duna Korzo, the Chain Bridge, or from one of the rooms and balconies of the world class hotels that line the Pest side of the Danube. 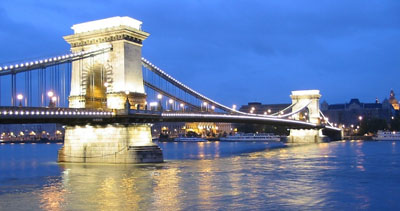 Budapests Most Famous Bridge The Lánchid was the first permanent bridge over river Danube between Buda and Pest and was built from 1842 - 49. Count István Széchenyi had to wait a week before he could cross the river to bury his father. He then ordered to have a permanent traverse over the river being built for which he commissioned the Englishman responsible for London's Hammersmith Bridge, William Tierney Clark, to design a bridge, and a Scotsman, Adam Clark, to oversee its construction. Legend has it that sculptor János Marschalkó forgot the tongues of the bridge's lions. When he found out he desperately threw them into river Danube. Today it is the bridge that attracts the largest number of visitors. This is due to the fact that it is the probably most beautiful of the Danube bridges of Budapest and also because it is a pedestian only bridge. The Nazis have done considerable damage to the bridge, so the structure had to be repaired and re-inaugurated on 21 November 1949. Adam Clark is honoured in a small square at the foot of the bridge. The kilometre zero, the point from which all distances from Budapest are measured, is located here. 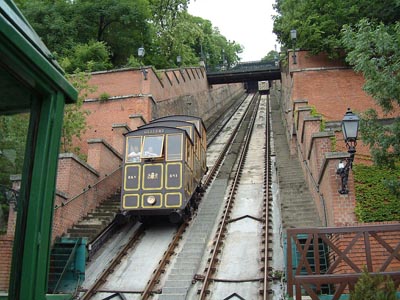 Dont walk up the hill, take the Funicular!  Didn't quite managed to get a ride on the Funicular (Sikló) because by the time we saw it we were on the way down! It looked nice though. "By far the most tranquil way of ascending Castle Hill to the Royal Palace is the Sikló. Originally opened in 1870, its main function was in providing cheap transport for local workers. Fortune has, however, not always favoured the two little cable cars. Wrecked by German shelling in 1945, the Sikló was left in a state of disrepair until being fully restored in 1986. Whilst photographers and video enthusiasts will find shots from the Sikló irresistible in the early morning, romantic couples will, no doubt, prefer the spectacular floodlit views of the city at night. The lower terminus is just next to the bridge at Clark Ádám tér."

This is one of the few remaining Turkish baths in Budapest. Built in 1565 by the Pasha of Buda, it remains popular to this day. The Turks were so concerned that they might not be able to use the hot baths if the city was besieged, they had this one constructed within the castle walls. They piped the water in over a considerable distance, and today the building stands as a magnificent testament to their ingenuity. The four baths range in temperature from a pleasing 26 degrees centigrade right up to an endurance-testing 40 degrees centigrade. Please note that there are separate days for men (Mondays, Wednesdays and Fridays) and women (Tuesdays, Thursdays and Saturdays). 9am-9pm Mon, Wed, Fri; 6:30am-7pm Tue, Thu; 6:30am-1pm

The Military History Museum is in the former army barracks dating from the 1830s. Look at the walls and you will find cannonballs embedded, in memory of the Hungarian army which liberated Buda Castle in 1849. You will find exhibits on the 1848 revolution and war for independence, the Hungarian Army from 1922 to 1944, and the 1956 revolution. Phone: +36 1 356 9522 Directions: Buda Castle Hill, accessible by Varbusz and Bus 16.

The House of Hungarian Wines

You could think that paying 3500Ft (about 14?) to visit a cellar is slightly too expensive... It depends on what you can do in the cellar!! In fact, you can see a lot of bottles of wine from the different wine areas of Hungary, panels (in German, English and French) explain what are the main characterisitc of each region. It starts to become interesting when you know that for each region, you also have a few open bottles and that you can use them to (re)fill the glass you get at the intrance... At the end, you have the possibility to taste 55 different kind of wine!! Be careful and don't pour full glass but just a sip of each wine otherwise you want be able to finish the visit ;-) My personnal list is as follow: Szöke - Matraaljai - chardonnay Szekszardi - vinarium - cabernet franc Mohácsi - Vaskapu - Kasteli Villányi - wunderlich - Alajos - Monarchia Villányi - Le Sommelier - Cabernet Sauvignon (***) Egri - PPP KFTT - Monarchia - Leánika-Zengö Hajosi - Cabernet Sauvignon Last thing to mention, this is not open in the morning: from noon till 8pm... Ah, and I almost forgot it: this is of course a fresh place, it can be a huge incentive during one of these hot summerdays... Directions: In front of the Hilton Hotel, close to St. Matthias Church.